The first Cutlers' Hall was built in 1638 on the site of the present Hall.

The accounts show that the Company bought the land for £69.12s and paid £86.3s.10d. for the construction or conversion of the building itself. Unfortunately, there are no contemporary pictures of this Hall.

A drawing was executed in the early nineteenth century and is thought by some to be of the first Hall and by others to be of the Tavern where the Company held its meetings prior to 1638.

This first Hall was demolished in May 1725 and the site cleared for the building of the second Hall - this time at a cost of £430.10s.

In 1720s, the Company decided that rather than improve its present Hall, it would look for a better piece of land on which to build a new Cutlers' Hall.

Negotiations were undertaken with the Duke of Norfolk's agent, Mr. Henry Howard, who offered the Company a large parcel of land close to where the present Town Hall stands. However the ground rent for this land was set at £22, but the Company would only agree to £21.13s 3d. Therefore, for the sake of 6s 9d, the scheme foundered and the Cutlers' Hall remained on its present site.

By 1827, the state of this second Hall was causing a great deal of public concern. A letter appeared in the Sheffield Independent saying:"Its (the Cutlers' Hall) exterior appearance is unworthy of the Company to whom it belongs, and its interior accommodation are not only bad, but disgraceful to a body of so much importance."

In 1832, the present Cutlers’ Hall, the third on this site, was built following the demolition of the second Hall.

It was designed by two architects, Samuel Worth and Benjamin Broomhead Taylor, who had both submitted plans, but when the Company was unable to choose between these plans, the two architects agreed to work together.

In 1867, the Hall was extended to the rear, with the addition of the Large Banqueting Hall on the first floor with the Hadfield Hall beneath and in 1888, the frontage was extended westward.

It is a Grade 2* Listed building and is considered to be one of the finest Livery halls in the country. When the Foundation stone was laid in 1832, the Master Cutler stated that: "...this Hall is intended not only for the Cutlers’ Company, but for the general purpose of the Town."

Tours of the Cutlers' Hall

Tours, which must be booked in advance, last about an hour and a quarter and are conducted by the Beadle, the deputy Beadle or the Archivist. 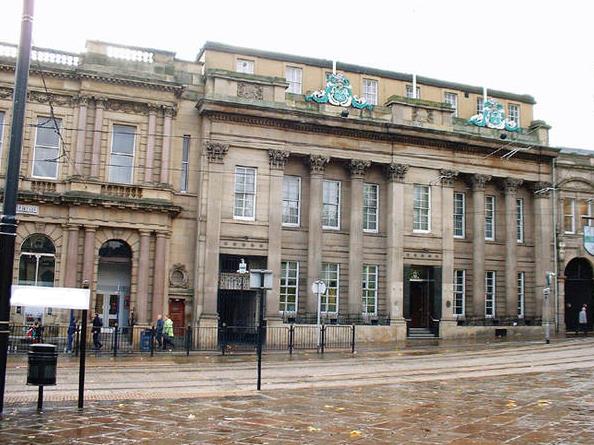 Leave the M1 at Junction 33. Follow the A630/A57 to Sheffield to the Park Square Roundabout.

Go up the hill through the traffic lights go straight ahead

Straight on to the traffic lights, stay in the inside lane of the road for access and buses 100 yards, then move into the right hand lane to continue straight ahead.

Using the Bus Lane which says 'except for access', go through the traffic lights for about 150/200 yards, The Cutlers' Hall is on your left (between the HSBC Bank & The Royal Bank of Scotland).

They are next, with the big silver doors, directly opposite the Anglican Cathedral.

Please note there is no onsite parking.

The nearest 24 hour car park is only a few minute’s walk away to the hall - N .C .P Arundel Gate is underneath the Crucible Theatre. Access is available from both sides of Arundel Gate.

On entry to the car park at Arundel Gate take a token at the barrier and park your car. Take the token with you but do not leave it in your car. When you are ready to leave the Cutlers’ Hall go to the cloak room to validate your token on the token machine to get the discounted rate. Then pay your money at the N.C.P. car park machine before you get in your car

The Cutlers' Hall is located 800 metres from Sheffield's Midland Station, a 5 minute taxi journey away.

Leaving the M1 @ Junction 34, park your vehicle free of charge in the Meadowhall Shopping Centre. You can catch the tram into the City getting off at the Cathedral Station stop (this is directly outside The Cutlers' Hall). This takes about 15 minutes, and is a very pleasant way to see the City.

Accessible by Public Transport: Sheffield station is 1 mile away.

Tours of the Cutlers' Hall